This article is outdated and may no longer be accurate.

So I have heard the rumors of people on Twitter getting shadowbanned, and decided to follow suit by making a Twitter bot that will tell users that they weren’t shadowbanned (because why not, it only took a few dozen lines of Python code). If you don’t know what a shadowban is, it is pretty much an account-wide ban placed on you without your knowledge, but I will explain what this means in more detail later. While making this bot, I learned a lot on shadowbans, such as possible causes and how it affects the account’s behavior.

Most of Twitter’s “bans” can fall into five categories: Suspension, Limitation, Filtered, Withheld, and Shadowbanned, each demonstrated in the below infographic:

A suspension is when an account is completely disabled, preventing use of one’s account until further notice (typically permanent). This usually happens if you break the Community Guidelines, or if an account is reported enough in a period of time (can’t confirm if this is true though).

A limitation is when an account has been flagged for breaking the Community Guidelines, but acts as a warning. These typically last no more than a day, and have similar effects as if your account is shadowbanned. You don’t show up in searches, nor do you trigger people’s notifications. Once the given time period ends, your account is restored to normal. 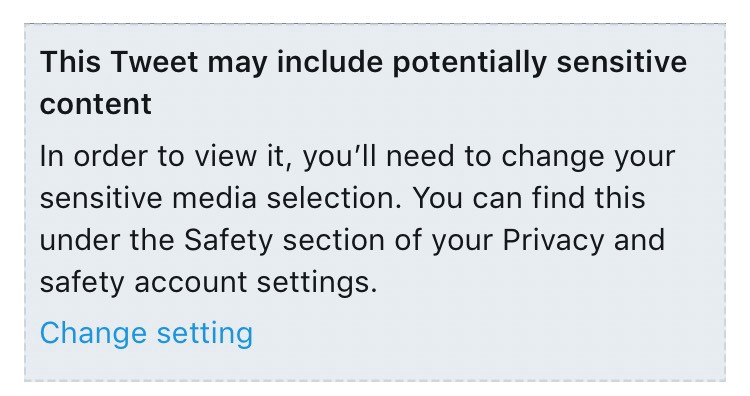 Filtration is when Twitter’s algorithms thinks a specific reply isn’t fit to show in a comments section without pressing a “Show More Replies” button. This typically is triggered when vulgar is said in the post. Also under this category is the hiding of “sensitive content,” which doesn’t envelope an entire account, but individual images. A good example of an account like this is @ItMeIRL, a /r/me_irl mirror bot. Most are censored (due to the nature of the posts), but some do show up fine. The difference between this and standard filtration is that this filters through top-level (non-reply) posts, not replies. As a user, you can disable the hiding of “sensitive content” in your account settings.

Finally, shadowbans. Shadowbans aren’t a new concept. Reddit uses this technique on occasion, but Twitter’s shadowbans don’t seem to be what everyone thinks they are: which is to suppress certain accounts. What shadowbans are used for is to counteract spam, and this is where @YouArentBanned, my Twitter shadowban bot, comes into play, not because of the code behind it, but its treatment by Twitter, as it was shadowbanned.

Now, the bot in question doesn’t produce unique comments, it’s mainly the same structure repeated in a predictable pattern. If you didn’t know any better, you could assume it’s a spam bot to troll people (despite this it has had quite the positive reception). Based on the apparent spammy nature of the bot, as well as the fact that it was shadowbanned an hour after the script went live, the shadowbanning process had to be automated, and as a result of spam. All of those accounts who have fell victim to shadowbanning were likely seen as either bots, either to push a political agenda or to spam up one’s timeline, or were just mistakenly caught in the algorithm’s line of fire. In fact, Twitter has confirmed that it’s due to spam, according to blogger Tania (you should read the full article, located here, as it also covers shadowbans).

Additionally, it seems like it is possible to be shadowbanned on one account and not the others. This was seen mainly on the bot, with the account’s tweets being in one user’s notifications and shadowbanned on my account.

There are three ways to check if you are shadowbanned:

Additionally, just like Reddit, a shadowbanned account’s replies don’t show up, but increment the comments counter. Be wary though, as this is also the case for private accounts.

Now, how do I fix shadowbans?

Most other kinds of bans have a way to get your account restored to normal, whether that involves being paitent or challenging the ban. However, shadowbans seem to be a mystery with mixed solutions. The most valuable insight on how to recover from a shadowban once again comes from Tania:

While I’d set up a new account, I knew I had to try in the hope I could get my original Twitter account back. I’d worked so hard to create my community. Low and behold, within 2 hours of contacting the Ads team, my Twitter shadowban had been lifted (and I didn’t have to buy any ads, only enquire about them).

In summary, it was suggested to either request to place an ad, or submit a verification request, to restore her tweet’s visibility. However, after just a few hours after Tania published her blog post on how to circumvent (to some extent) shadowbans, Twitter caught on, and started turning people down. Additionally, some of people’s previously remedied shadowbans were reenacted. However, there seems to be light at the end of the tunnel. By just changing her tweeting habits, Tania was able to un-shadowban her account after a few days:

I canceled all promotional blog tweets and just used Twitter for sharing daily life bits and bobs without hashtags. After 48–72 hours (because I don’t know when I was hit by the shadow ban) it was lifted. I’m not going to apply the 70:30 ratio, with only 30% of my tweets being blog promotion.

So are shadowbans real or a myth, and can you resolve them? Well they are real, but they usually involve you seemingly being a bot to advertise, sway opinions, or just to annoy other users. Can they be resolved? Possibly, but it seems to be far from consistent.